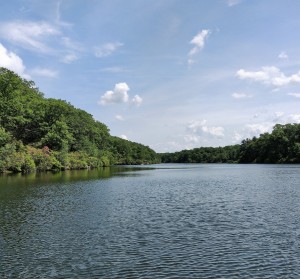 Arthur’s Pond, where I went to collect samples yesterday

In the past week, with the help of my trusty field guide and my best friend the pole saw, I collected 45 leaf samples from 11 different tree species.  This group includes both trees from which I collected last summer and new species, primarily invasive shrubs.  My total sample number is up to 72 – I’m already more than halfway to my goal for the summer!  And I’m starting to get pretty good at tree identification.

The easiest part of my work this June is gathering additional leaf samples from trees that are already on my sample list from last year.  Half the work of gathering samples is finding the right trees – carefully examining leaf shape, bark patterns, locations, textures, and more to figure out whether a tree I’m looking at one from which I want to take a sample.  It’s a bit like piecing together a puzzle.  Similarly to looking at the full picture on the puzzle’s box, I use clues at my disposal (information from my field guide, photos saved to my phone, etc.) to make a basic hypothesis about what the tree is from distance.  Similarly to sticking a puzzle piece into a few other pieces to find out what fits, I get up close to the tree, look at one or two leaves, and often feel the texture of the leaf or bark.  And similarly to matching one completed segment of a puzzle to another, I get down branches of the trees that I think I’ve identified successfully and bring them back to the Science Center, where I ask an expert (usually Dr. Schuster) to confirm or deny my suspicions.

If I’m searching for something familiar, such as oaks or maples, those first two steps go a lot more quickly and I can usually skip the third.  Like learning a new language, tree identification gets easier with practice – and I’ve seen enough maple leaves now that I can confidently tell between red maple and sugar maple with a few glances.  Oaks are a bit more challenging (especially distinguishing between red maple and black maple, which have almost identical leaf shapes), but my skills from last summer are coming back to me.  I also was able to distinguish American beech, eastern cottonwood, and slippery elm with decent success this week.

When I ran cross country in high school, my coach always alternated between “easy days” and “hard days” at practice, to keep us from burning out.  I’m using that philosophy to plan my collecting schedule now: I keep a balance between “easy days,” looking for familiar tree and shrub species, and “hard days,” looking for unfamiliar ones.  This week, Wednesday and Thursday were easy days, Friday was a hard day, and Monday and Tuesday were a bit of both.

Some “easy” and some “hard” on Monday and Tuesday:

On Monday, I hauled ass.  I went to Aleck Meadow Reservoir, a location where I’d done a fair bit of collecting the previous summer.  I hoped to find black gum and American beech, both species I’d found there last year, as well as multiflora rose, one invasive species that also grew in the area according to Black Rock’s herbarium.

I found all three species (or at least, what I thought were all three species) and collected 12 samples.  I aim for a minimum of 6 samples each day, so collecting double that number was exciting, even though I had to scramble to process all the samples (i.e. clip off all the leaves and stuff them in envelopes) before a barbecue with Dr. Schuster’s family and the other Barnard students staying at the forest.

Dr. Schuster told me that three of my samples weren’t black gum, as I’d thought, but were actually a species of ash.  Still, I wasn’t discouraged – he also gave me a suggestion for where I could find black gum, in a part of the forest close to Aleck Meadow.  I went there on Tuesday, where I successfully located six trees to sample.  And I got three more branches of multiflora rose – this shrub is a bitch to process because it has thorns on its stems as well as the undersides of its leaves, but it’s easy to identify because of its white flowers.

Also on Tuesday: I noticed something new in the lab.

Re-acquainting with old friends on Wednesday and Thursday: 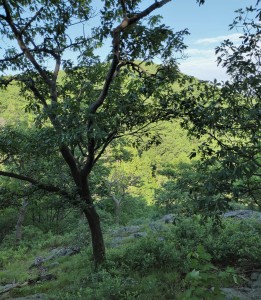 On Wednesday, I practiced my oak and maple identification skills by climbing up Honey Hill, a trail fairly close to the Science Center.  This peak is a good place to collect those more established species, especially oak, because they don’t grow as tall in high elevation areas; fully grown trees are short enough for me to clip branches with a pole saw, or even just by hand.  I collected 5 red maple branches, 3 chestnut oak branches, and 2 red oak branches, and marked several more oak trees to return for another day.

On Thursday, I collected a couple of invasive species (eastern cottonwood and slippery elm) out by the highway.  While searching for eastern cottonwood, I did something very brave and very stupid – you can read my full post about that for more details.

Looking for new invasives on Friday: 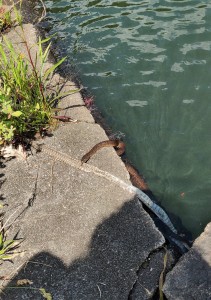 On Friday, I decided to go for a longer hike.  I walked to Arthur’s Pond, a couple of miles away from the Science Center, and sought out several species of shrub that herbarium specimens led me to believe would be located there.  I grabbed three branches of Japanese barberry (a thorny, rapidly spreading invasive plant from East Asia) and three of what I thought might be knotweed, and brought them back to the Science Center for confirmation.  Dr. Schuster gave me one for two: I was right about the barberry, but what I had identified as knotweed was actually lowbush blueberry.  (I still kept those branches as samples, though, because blueberry is a native shrub species in the northeastern U.S. that will make a useful comparison with my invasive shrubs.)  I also found a lone slippery elm tree at the pond, which was surprising because this species has only been documented along roads.

This week has been a tiring one – I didn’t leave the lab until after 8 pm for three days in a row.  But it has also been a satisfying one.  I found 11 different species, including three that are new to my project, and identified several places to return for more samples next week.  I’m improving my identification skills.  I’m getting into a good rhythm with my collecting methods.  At this rate, I’ll be up to 120 samples in no time – as long as I don’t slip off any rock outcroppings, that is.